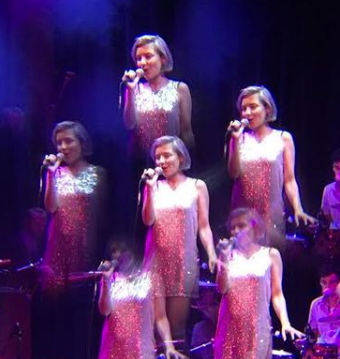 Processing Grief through Music: The "In the Valley" Story

When my dad was sick with Frontotemporal Degeneration, I would fly back and forth between my family in Cleveland, and my home in Los Angeles as often as I could. Losing someone to bvFTD and ALS is surreal, and as a long-distance caregiver, I really struggled to articulate the guilt and heartache I was experiencing.

One trip, I arrived on the redeye just in time to bail my dad out of jail - he had been arrested and spent the night alone in a cell (*incarcerated populations are expected to include more than 200,000 people with dementia over the next decade, but that’s a whole other blog post). It felt so absurd to watch my heroic dad rapidly changing into someone who could no longer be autonomous in the world. But dad wasn’t upset about it at all. He simply laughed when he emerged from lock-up, so I pulled him in for a big, long hug.

On my flight back to LA, I began to give voice to the experience, shaping my many shades of grief into a narrative I could not only tolerate, but also find beautiful. I wrote the lyrics to what would eventually become “In The Valley,” off Sumeau’s 2020 album This is Not a Dream. Inspired by my involvement in the Association for Frontotemporal Degeneration’s annual fundraising campaign, I ended the chorus’ with the phrase “with love” because acting with love was the only sane way to deal with a loss like FTD.

When faced with anticipatory grief, ambiguous loss, and worry over my own health in relation to this potentially genetic disease, I was fortunate to be able to turn to AFTD, my family, my partner, and our music. As I began to acknowledge these emotions in song, I found a sense of acceptance. It was a turning point for me, and the song became a reminder of how I could continue to approach this overwhelming loss… with love.

A few years later, we performed “In the Valley” at dad’s funeral and then recorded it on March 3rd aka dad’s birthday (his favorite holiday) the year after he died. It was emotional but ultimately one of the best experiences of my life. When our engineer Tyler sent a mix of the song sounding so psychedelic, like something off of The Dark Side of the Moon, I knew dad would’ve loved it. The appreciation for music that we shared over the years had inspired a new creative expression, giving me both a vehicle for healing and a meaningful way to honor our relationship after he was gone.

It is my hope that “In the Valley'' connects with other folks who experience FTD and other dementias. Regardless, writing the song really helped me acknowledge and articulate a difficult experience. My gut and my grief allowed me to tap into inner resources and remember that, like a river, grief flows and changes over time, but the comforting shores of creativity are always nearby.

No items found.
Back HomeRead All Stories